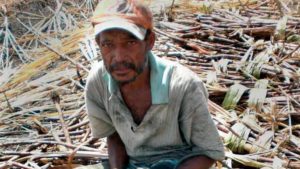 More than 35,000 people were rescued from slave labour in Brazil  over the past 15 years, but over 600 of them ended up in similar conditions at least a second time.

This means that 1.73 per cent of the 35,341 workers rescued from slavery in the country between 2003 and 2017 ended up in slave labour at least for a second time. Twenty-two of those were rescued three times and another four were rescued four times.

Workers who have difficulties accessing public services, particularly education, find themselves more vulnerable to exploitation and slave labour. The likelihood of a person returning to slave labour is greater among those with a low level of education, and the rate among illiterate workers is double that of those who finished primary education.

The issue has been in the limelight in recent months, after a government directive seen as weakening existing legislation was passed in October 2017, but the Supreme Federal Court suspended it following widespread criticism. In December, the government issued a new and tougher directive, which re-established the definition of forced labour according to Brazil’s Penal Code.

The new document makes it clear slave labour is an attack on fundamental human rights and the dignity of the worker. It spells out that victims must receive public services, with emphasis on the most vulnerable groups, including foreign workers, domestic workers and victims of sexual exploitation.