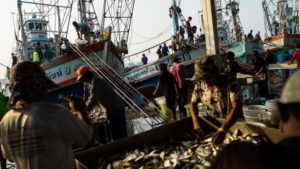 Thai fishing boat owners who trap workers on board ships and withhold wages often do not realize that is modern slavery, so authorities must ramp up their policing efforts, advocates say.

Research shows many fishing operators are oblivious that the grim conditions on board their ships amount to forced labor, according to a recent report.

Many operators know smuggling people across borders and forcing them to work at sea for long periods of time is wrong but see withholding documents or forcing them to pay off debts as acceptable, said the report by Issara Institute, a Bangkok-based anti-trafficking organization.

Thailand’s multibillion-dollar seafood sector has been the target of scrutiny in recent years following investigations that found slavery, trafficking and violence on fishing boats and in onshore processing facilities.

The findings show a need for stronger efforts to improve the working conditions and bring the fishing industry in line with anti-trafficking laws, advocates said.

The military government in Thailand has rolled out industry reforms since the European Union in 2015 threatened to ban its fish imports, but little has changed, Human Rights Watch said in a report also released last month.

“It’s really important that we understand their perspective so we can pull the right levers,” he said.

About 25 million people globally were estimated to be trapped in forced labor in 2016, according to the International Labour Organization and rights group Walk Free Foundation.