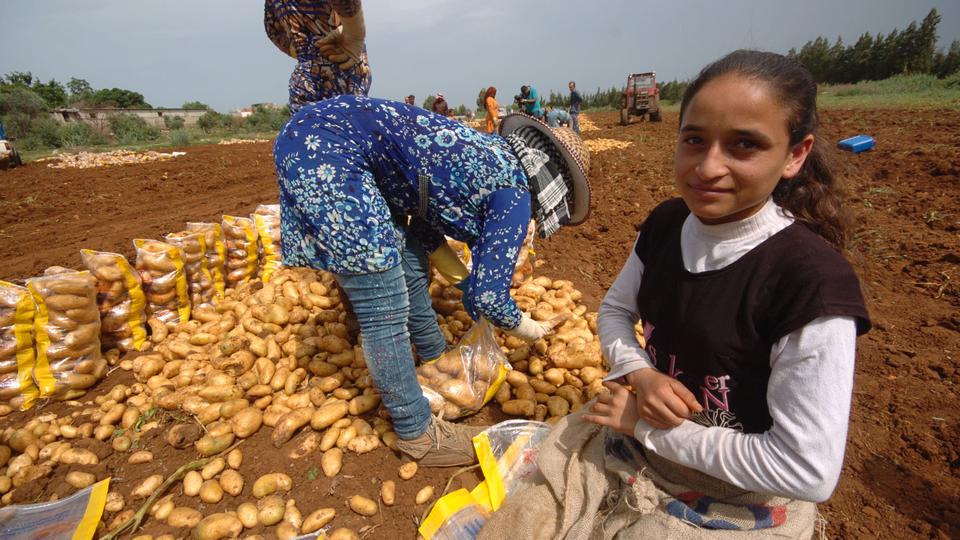 This young girl at a potato farm is one of hundreds of typical child slaves. (Martin Jay /TRTWorld)

Mohamed is only 11 years old and considers himself lucky. Unlike hundreds of Syrian refugee kids who are reduced to working on farms in the east of Lebanon in the Bekaa picking potatoes under the stifling heat, he is in trendy West Beirut and learning to be a carpenter. Nestled in a matrix of sophisticated bistros and cafes, we find him in a basement carpentry shop, surrounded by huge machines and off cuts of wood.

Yet within just a few minutes of interviewing him via an interpreter, the tears begin to roll down the side of his face when he is asked how much his boss pays him. He is given accommodation and fed and I suspect his Lebanese guardian considers this enough in lieu of any kind of payment.

Mohamed is a child slave. But this is not Sudan or Libya. This is Lebanon, a country once considered to be a shining light in the region for human rights and an epicenter of UN agencies catering to the needs of well over a million Syrian refugees.

How could Mohamed exist in such a day and age? Who’s really to blame?

Many believe he is a victim of a system which can’t self regulate, by a society which while it derides the notion of Syrian children working as slaves, can’t help but contribute towards it.

“We’ve become numb to it, I’m afraid,” explains Hana Addam El-Ghali of the Issam Fares Institute for Public Policy and International Affairs. “And anyone who does nothing when a Syrian child of eight or nine years old delivers food to their door from the supermarket is supporting it. Society reflects the state position.”

The American University of Beirut academic is completing a study into the trend of child slavery and says she believes the numbers are rising.  But she claims that the heart of the problem is a sense of apathy and denial from the government in Beirut who only seems to be able to take international donors’ contributions for education, but not follow up on making sure Syrian kids are in school.

It’s all about the money, right?

El-Ghali believes that it is not always grinding poverty that is responsible. She claims that Syrian refugee kids have no assistance if they are left behind by the others in class and so parents tend to take them out of school more for their own dignity – as ‘vocational’ training is both scarce and frowned upon. She struggles with the notion that it’s a crisis brought on by lack of public money alone – both by the families and the state, although reluctantly admits that money is needed.

“The law says that if a parent doesn’t send their child to school they should be fined and there should be consequences … [but] who is there to take charge of this implementation? You need the financial capacity to mobilise the resources to implement this law … so it’s a matter of priorities, in my view,” she argues. “The laws are there; we just need to implement them.”

Her views though are not shared by the political elite who are indignant towards Syrian refugees in general – in particular those who receive support from UN agencies, but then still allow their kids to work as child slaves.

“It’s already a sort of a miracle that Lebanon is coping with such numbers of refugees and still being able to remain stable and to contain all the consequences – social, economically and on the security level – on all levels that this presence is provoking,” says member of parliament Alain Aoun.

“I think for the refugees who are benefiting from assistance from the international organizations … actually they have to condition the parents including the children if they want to benefit from these things. They have some leverage on the parents and they have to use it.  They have to make sure that their children are going to school and not working somewhere like in a factory or wherever,” he adds.

‘When we were kids’

Mohamed’s situation is not the typical one though which draws such resentment. Yet, with the very recent move by the Lebanese government to send Syrian refugees back to Syria, many might well follow this idea of leaving their kids in Lebanon, to acquire some sort of work skill. But at what price? The problem is really how their situations lead them into falling prey to being exploited sexually. A recent UK study in 2016 highlighted the extent of  ‘survival sex’ young girls were encountering, which was followed up by a Human Rights Watch investigation that backed up the claim, through interviews of victims. 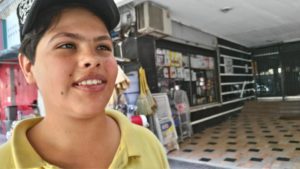 Mohamed is a child slave in West Beirut. (Martin Jay/TRTWorld)

For Mohamed, such a gruesome scenario is unlikely. But he’s nonetheless a victim of a venal system that has robbed him of an education and is, by definition, a by-product of a failed economy permeated by rampant corruption. And yet it’s also about the stigma of coaching slow-learning kids, to prevent them from falling out of sync with the curriculum, which is the case with Mohamed.

“I was in Barbir. I was in a school; I worked there alone, but it was hard … My parents wanted me to study, and I also wanted to, but it’s difficult,” he explains.

“Probably later will be better. I will get hold of the job, and if I can get back to school, I will do it … I wouldn’t stay here.”

Wiping the tears from his eyes, he begins to realize, almost on cue, that he is being exploited. He won’t tell me how much, if anything, his guardian is paying him and hints at poor treatment, while contemplating his lot as an adult whose childhood was stolen.

“If you can study in school do it because studying is better than working as the one that learns will have a future … he doesn’t stay a mere worker, his paycheck is lousy and they mistreat him,” he says, thinking back fondly to when he went to school with Lebanese classmates.

“It’s true when we were kids we used to hate studying, and we [would] say it’s not good, but when you work you will know that it is the best thing. Kids shouldn’t ever stay at work, and if they can go to school they should do that. They should study and not say that studying is not good … Studying is the most important thing.”