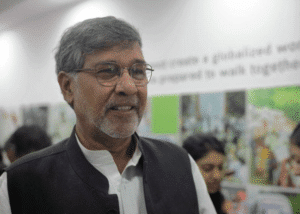 Ahead of a summit of global leaders and Nobel laureates in Jordan this month on children’s rights, Satyarthi said organized gangs involved in other crimes had moved in to profit from slavery which is estimated to generate $150 billion a year.

“This refugee crisis has resulted in trafficking and slavery,” said Satyarthi, joint winner of the 2014 Nobel Peace Prize with Pakistani schoolgirl Malala Yousafzai for his work curbing child labor and fighting for their right to education.

“Human trafficking, small firearms and drugs are the three most organized crimes. Now they are intermingled,” he told a workshop on trafficking run by the Thomson Reuters Foundation.

He said there was growing recognition that slavery was a global issue with figures from the United Nations International Labour Organization (ILO) and rights group Walk Free Foundation estimating about 40 million people are living as slaves.

India is home to more slaves than any other nation – previous global estimates put the number at 18 million – with men, women and children trapped in forced labor and sex work.

Tens of thousands of children go missing each year in India with authorities now trying to set up a facial recognition system to match more than 100,000 children living in government or private shelters with reports of those who have disappeared.

Satyarthi said he had heard reports of Syrian refugees agreeing to child marriages for their daughters to stop them from being sold into the sex trade or other forms of slavery.

He will meet with leaders from Jordan’s King Abdullah to Panama’s Juan Carlos Varela and various Nobel laureates and activists this month to address challenges facing children on the move, such as migrants, refugees and trafficking victims.

“Trafficking and slavery, and the denial of education combined with the refugee crisis, must be brought to the fore,” said Satyarthi, whose charity Bachpan Bachao Andolan says it has freed at least 80,000 child slaves in India over 30-odd years.

Satyarthi said India’s first anti-trafficking law, which may be passed this month after being approved by cabinet last week, was a major step forward with life sentences for traffickers and a rehabilitation fund to help victims rebuild their lives.

Yet Satyarthi warned that it was not the end of the fight in India.

“The caste system, gender discrimination, and the apathetic attitude of government officials and corruption are the biggest hurdles,” he said.